The Damascus Blade (ダマスカスブレード, Damasukasuburedo?) was Alita's signature weapon and was named for its similarity in appearance to Damascus steel. The blade was a representation of Alita herself, as the imperfections and emotions that Alita had experienced made her tougher than the emotionless TUNED AR Series 2 combat androids.

The Damascus Blade was originally two individual blades with an inside serrated edge that were mounted to the forearms of Alita's motorball body as an optional configuration. As Alita became a more proficient motorball player, Ed would later take both blades and have them reforged into a single bladed weapon; it would become slightly larger with the serrations replaced with a series of holes to conserve weight and balance it. This new blade was hard as diamond and could only be honed with high pressure water or supersonic waves. It consisted of rare metals, including scandium, yttrium and lutetium, and had patterns suggestive of Damascus steel.

Two years later after she agreed to serve as an agent of TUNED, Bigott Eizenburg and the Ground Investigation Bureau would take the Damascus Blade and once again modify it, this time into a giant balisong, enabling it to be used as a pole weapon. 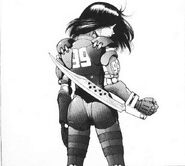 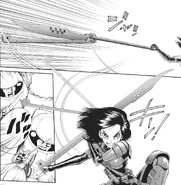 The new redesigned version of the Damascus Blade as a balisong

The Damascus Blade originated as a pair of blades forged from scrap metal by "the finest blademaker"[1] that Alita wielded on her forearms early in her motorball career. After she formed her challenge team to take on Jashugan, her manager Ed had the master blacksmith Lam Dao forge the pair into a single blade, giving the weapon its most distinctive appearance. How Alita learned to use the blades effectively was not originally revealed. However in Last Order it is revealed that she was a member of the Panzer Kunst's Mauser School, which used a dual elbow blade weapons technique known as Elbogen Blatt.

After Alita retired from motorball, the Damascus Blade was later modified for use by hand, but did not have a hilt attached. Alita kept it wrapped up in cloth in her apartment while she lived on her own for two years. She did not use it until she was summoned to Desty Nova's manor. There she killed Desty Nova, Barzarld, and Eelai after discovering that Daisuke Ido had been killed, but they resurrected due to Nova's restorer nanomachines. Alita later used the Damascus Blade in her fight against Zapan in the Berserker Body. Although she was sentenced to be executed by the Factory for the Class A Offense of using a firearm in the Scrapyard, the Damascus Blade was recovered by the Ground Investigation Bureau. After she joined the TUNED it was modified for use as a pole weapon. In the original manga ending which was later retconned by Last Order, it was presumably destroyed or lost when Alita was killed by Desty Nova using a powerful doll bomb, as no further mention was made of it.

Nova recovered the Damascus Blade after killing Alita with a powerful doll bomb but found out that it had sustained extreme fatigue. He decided to use it as a component for Alita's new Imaginos Body, further strengthening the link between blade and bearer. The Damascus Blade would also be an inspiration for Sechs' Titan Blade, who wanted to see how it matched up with the original. After gaining more control of her Imaginos Body Alita can generate the blades on her forearms and later withdraw them.

During the semi-finals of the Z.O.T.T Alita's new body underwent a total systems overhaul, twice. To follow suite her Imaginos fused Damascus Blade also changed in various ways, firstly sporting a new design to go with her newfound look and again finally after her second deconstruction and rebirth at the hands of Toji, coming off in the form fitting semblance with her angelic motif.

The Damascus Blade appears in Gunnm: Martian Memory. Gally can use the handheld version of it after she retires from motorball. When she becomes a TUNED agent she is equipped with the balisong version, which is referred to as the B Damascus Blade (Bダマスカスブレード, B Damasukusu Bureido?).

In Alita: Battle Angel, it is first shown in Zapan's possession, and he is aware that it is URM technology. According to Zapan, the Damascus Blade was honed to a monomolecular edge, which slices armor "like butter". However how he acquired it is not explained. Alita seizes it from him following their confrontation over Hugo, and she later incorporates it into the left arm of her motorball body, being able to channel plasma into it.

Retrieved from "https://battleangel.fandom.com/wiki/Damascus_Blade?oldid=19742"
Community content is available under CC-BY-SA unless otherwise noted.