Desty Nova (ディスティ・ノヴァ, Disuti Nova?) was a renegade Tipharean scientist and the father of Kaos. He is the second Tipharean introduced in Battle Angel Alita. Nova is a highly eccentric, yet brilliant and creative genius who specializes in Nanotechnology . The focus of his research is the study of karma (Karmatron Dynamics), leading him to pursue what can be considered hideous and inhumane experiments. He has also given a few of his patients a new lease on life to see if they are capable of overcoming their karma. Nova's motives were driven by his discovery of the brain bio-chip that functions as the brain for all adult Tiphareans. The brain biochip was created by the GENE Project, a LADDER initiative intent on producing super geniuses.

Although responsible for turning several characters into the major adversaries that Alita faces, namely Makaku, Jashugan, Zapan, and Den, the relationship that develops between the two is complex, alternating between that of enemy and ally. This evolves further in Last Order due to the actions of several of his incarnations who were born in the wake of the original Nova's death.

As a Tipharean, Nova is a man with fair hair, depicted in colour illustrations as being white. His most distinguishing characteristic is the unique and ornate glasses that he wears, which he is never seen without except just once, when he took them off during a dream sequence that Alita was experiencing through the Ouroboros Program.[1] He usually wears a dress shirt with tie and slacks, over which is a white lab coat. As an indication that he has become a citizen of Tiphares, he bears a small tattoo of the Tipharean symbol on his forehead. In Gunnm: Martian Memory Nova wears a white lab coat with dark green trim, a yellow dress shirt, and red tie. His white hair has a blue tinge. An illustration by Yukito Kishiro for the 2003 Ultra Jump calendar depicts him as having white hair and wearing a white dress shirt, white lab coat, and purple tie.[2]

When leaving the Scrapyard in ES 580[3], Nova was dressed in a patterned short sleeved shirt and shorts.[4] In the early part of the final dream that Alita experienced while trapped in the Ouroboros Nova wore a medium coloured scarf over his lab coat.[5] After Alita decapitated him in the Granite Inn, he appeared minus his head but with his backup head in his stomach exposed, wearing the collar and tie from his dress shirt and the rest of his clothing.[6] 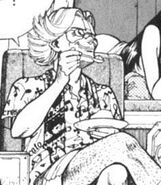 Nova without his glasses in Battle 49 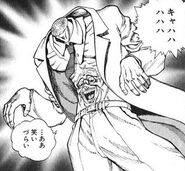 Nova was driven by his desire to research karma, which he terms Karmatron Dynamics. His views of human life and what would be considered humane by others, were coloured by his discovery of the brain bio-chip. This led him to undertake numerous experiments, many of which were considered by others to be inhumane and sickening and without apparent regard for the lives and well being of those he experimented on.

Conversely, however, he has taken on certain characters as patients with the aim of giving them a second chance at life and typically with newer abilities and powers that they did not possess before, again within the context to see how they would overcome their karma. Nova is known for his characteristic laughter ("kyahahahaha") and his obsessive love of flan.

During the time in the cyber space that Nova made into a dream that he impression Alita in, Nova showed a different side of himself during the time he spent with Alita as he admitted that he wonders what it is that he was chasing and trying to achieve. When the dream was broken and right before his death he admitted that he wished that the dream could have been longer. However, due to backing up himself he returned to life, but this version of Nova doesn't seem to care or show any hints of the sympathetic side the former showed.

Kaos: Nova and his son Kaos were estranged from each other stemming from the latter's opposition to his father's experiments. When Kaos was young he received a bird as a present from his father which he one day let out of its cage, resulting in it being shot and killed by a netman. Nova called Kaos foolish for his ignorance that nothing that could fly was permitted in the Scrapyard. After discovering the Den aspect of Kaos' personality, Nova installed an EPR transmitter into his son's chest to separate Den from Kaos. Upon reuniting with his son, Nova had little hesitation to subject Kaos to various disgusting and painful torture experiences, telling his son that it would all be for making him a stronger, more suitable man.

Jasmine: Jasmine acted as a caretaker to Kaos in Nova's household while Kaos was a child, and was a close friend of Kaos growing up. Nova had no qualms about having his Cyborg Assassins kill her, even though she was a close friend to his son, or that she had served him in helping care for his son during childhood.

Genius intellect: As a creation of the GENE Project, Nova had a genius level intelligence and had expertise in several areas.

Expert cyberphysician: Nova was a highly skilled cyberphysician, allowing him to work on any type of cyborg. He also experimented with turning normal people into all manner of hellish cyborgs.

Master inventor: Using his expertise in nanotechnology, Nova created numerous inventions and devices, among them the most advanced to appear in the series.

Nova was cast out in B.K. 16 from the Tiphares utopian society due to his unorthodox and grisly research methods undertaken to unravel the universal components of karma. Nova's personality ranges from calm and composed to maniacal and insane. Over the course of the series, he ranges from outright evil to being a generous ally and then back again. One thing remains certain and that is he holds his research in the highest regard over all else and will willingly sacrifice the lives of anyone to be able to further even the most trivial aspects of his research.

Nova initially came to light through the warped results of his experiments that have manifested themselves among the inhabitants of the Scrapyard.

The first was the brain-eating criminal Makaku who began life as a sewer-dwelling boy who was horribly burned and left for dead by a gang of flamethrower wielding punks. Granted a powerful worm-like body with the ability to inhabit the bodies of his victims, Makaku terrorized the scrapyard for years before being defeated by Alita.

The second was the superhuman neurally-enhanced Jashugan, a formidable motorball player who was able to go onto to dominate the sport as grand champion thanks to Nova's surgery. However, the life-saving procedure performed by Nova was not perfect and he slowly began to die. However, this was not before Jashugan fought an epic one-on-one showdown with Alita in a climatic battle on the track.

Emboldened by overwhelming evidence that a fellow Tipharean was behind these events, Daisuke Ido visited Nova at his manor in the Northern District. Ido was greeted by Nova who showed off the horrific results of his karmic research executed on hapless individuals before taking Ido prisoner. Offering him the chance to be his assistant, Nova then baited Alita into coming to his manor after which removing the lock on her Berserker Body while in the process of transplanting Zapan's brain into it. However, this triggered a series of events including the destruction of the manor, death of Ido, resurrection of Zapan into a more powerful body, and the destruction of a wide swath of the Scrapyard. Nova, however, saw all of this as a mere step in his karmic research and fled to the Badlands with his assistants to continue his work.

Nova spent the following years setting up a base called the Granite Inn in the ruins of the former Cheyenne Mountain nuclear bunker. In addition to capturing and mutilating thousands of innocents for further karmic studies, he allied himself with the Barjack, which was led by another one of his creations, the manifestation of his son Kaos' psyche into a physical form, Den. The Barjack's goal was the destruction of Tiphares and building a utopian society on its ashes.

Eventually, Nova was hunted down and killed by Alita at the Granite Inn following an intense fight that spanned the gulf of both the physical plane of the Inn itself and into the fabric of a cyberspace hell where Nova himself reigned as god. Decapitated by Alita who was aided by Kaos, Nova was assumed dead and the Granite Inn is destroyed. Afterward, Alita had planned to return to Figure Four in Alhambra. However on her way back she was ambushed by Nova using a powerful doll bomb which killed her. After recovering her remains, he used Support System Gabriel to return to Tiphares.

At the beginning of Last Order Nova reconstructed Alita with the help of his latest assistant, the young Jim Roscoe. Nova equipped Alita with a revised version of the Imaginos Body that incorporated her Damascus Blade as one of the ingredients. After her reconstruction was complete, he prepared a recording that would be triggered by her upon awakening. He then hijacked the Tipharean broadcast network and publicly revealed the existence of the brain bio-chips to all, triggering a civil war. The revelation had an unexpected effect on Jim, who killed Nova himself to discover the truth. Nova's brain bio-chips were taken and his body was left in his lab, where Alita found it a few days later.

However thanks to his stereotomy process, Nova was reborn as Nova II, who as the first incarnation stayed the closest to him in terms of personality. After Nova II was captured by Aga Mbadi, he was later reborn as Super Nova, who has an additional bio-chip. One of the original Nova's bio-chips was used by Ping Wu to create Porta Nova, and the stereotomy process produced an incarnation who outwitted the Tiphareans' attempts to eradicate them when he appeared. This version dubbed himself Nova X, and at one point three incarnations of Nova existed simultaneously. However following the death of Porta Nova at Super Nova's hands, only he and Nova X remain.

Retrieved from "https://battleangel.fandom.com/wiki/Desty_Nova?oldid=15706"
Community content is available under CC-BY-SA unless otherwise noted.