Nyssiana is a cyborg who fights Alita after disguising herself as a victim that Dyson Ido tries to save from Grewishka. A sadistic but overconfident woman, Nyssiana dies when Alita beheads her by kicking her head into a wall so hard that it separates from her body and remains stuck in the wall.

Though she only appears in one scene (despite appearing on quite a few posters), Nyssiana's view of the world is summed up when she tells Alita "You're so beautiful. I want to rip you open and see if you're ugly inside, like the others". A sadistic creature, Nyssiana excuses her vicious behaviour with her belief that, deep down inside, everybody else is just as evil and deranged as she is. Nyssiana also likes to play with her victims but because of this overconfidence, she underestimates Alita and gets beheaded.

Nyssiana wears a cloak to disguise her cyborg body, but when she throws the cloak off, she reveals that her body resembles that of a praying mantis. Her arms end in scythe like blades which she uses to stab and slash her opponents. She is also able very agile, able to somersault in midair after being struck by a powerful kick from Alita and land on the wall. Her scythes enable her to cling to and climb walls like a spider. 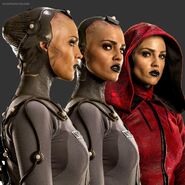