Dr. Super Nova (スーパーノヴァ, Sūpānovu~a?) is one of the later incarnations of deceased Tipharean scientist Desty Nova. Working alongside LADDER chairman Aga Mbadi, he emerges as a deadly antagonist to Alita.

During the later portion of Last Order, Super Nova would leave Ketheres and relocates to Mars to continue his experiments and research into karma.

While retaining Desty Nova's trademark glasses, Super Nova's appearance diverges considerably from his counterparts and predecessors by having an afro and sporting different clothing, in particular a knee-length jacket with a fur-trimmed collar over a dark shirt and pants. The Japanese version of Angel Redux, which has a lineup of several characters in Last Order, shows that including his afro, he is around 180 cm tall.[1] 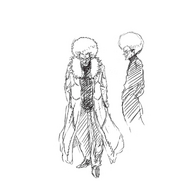 A preliminary design of Super Nova before his debut

Super Nova retains Nova's deep desire to dissect and experiment with a markedly more sinister and diabolic personality. He was almost giddy with excitement when he revealed that the brain inside the fortified box was Alita's and laughed as she suffered a mental breakdown due to the revelation. He has displayed his readiness to kill all of the brains in the Ketheres Brain Incubator and unhesitatingly attacked his fellow incarnations when they refused to join forces with him. While he was more diabolical than most of his fellow incarnations, it could be seen that Super Nova was also more cautious and alert to his surroundings than his other selves; when he arrived at Mbadi's private meditation area, he waited until Mbadi angrily confronted Tzykrow and had cooled off somewhat before approaching him.

Despite recovering Alita's original brain, her resurrection aroused a much greater curiosity in him and was anxious to prevent Aga Mbadi from frying her brain bio-chip. Also reflecting Nova's continued pursuit of karmic research, he rescued Tzykrow from Mbadi only to take him on as his patient and perform various experiments on him.

While allied with Mbadi, Super Nova was been given a great deal of latitude to carry out his own objectives. Mbadi gave him carte blanche over the Brain Incubator, signifying a high degree of trust in him, and did not object when Super Nova was prepared to prevent his hacking from damaging Alita's brain bio-chip. Super Nova was also allowed to leave for Mars after taking charge of Tzykrow.

Alita, and in particular her brain, is seen by Super Nova as a highly desired object of study. He later became interested in her resurrection purely from a research standpoint but remains focused on dissecting and analyzing her; he even began salivating at the idea when approaching her in the Z.O.T.T arena. Their opposition to each other marks a return to the nature of the earlier relationship that existed between Alita and the original Nova.

While it was believed that he was not surprised by the revelation of other Novas in existence, Super Nova revealed that he was prepared to crush any opposition to him that came from his other incarnations; within moments, he unhesitatingly launched a cyber attack that destroyed Porta Nova's bio-chip. While surprised that Nova X managed to escape a similar fate, he paid little thought to it and still viewed him as an adversary.

While Super Nova never properly interacted with the being known as Anomaly, he was greatly intrigued by it and would provide his own thoughts on how the being was created. Despite this fascination, he had no interest in acquiring part of its remains after its defeat in the quarterfinals of the Z.O.T.T.

Super Nova has two brain bio-chips, including one belonging to his immediate predecessor Nova II. This boosts his mental capabilities, but has affected his personality. These abilities put Super Nova on par with Alita in her initial Imaginos Body.

Nova II's brain bio-chip was extracted following his capture by Mbadi and was attached to an interface that allowed it to communicate. Three months later[3] and four days before the Second Round match of the Tenth Zenith of Things Tournament (ZOTT) between the Space Angels and the Starship Cult, Mbadi proposed to Nova that he become his assistant. Seeing the immense benefits this would grant him, Nova agreed and was rewarded with a new body with an additional brain-bio chip, a powerful hacking ability, and carte blanche over the Brain Incubator.[4]

Super Nova first appeared and gave himself his new name after Alita and Porta Nova gained access to the Brain Incubator. After Nova X joined forces with them against him, Super Nova revealed the details of the Tiphares Redevelopment Bill, but this did not change Alita's determination to win the ZOTT nor give up on recovering Lou Collins' brain. Super Nova then proposed that Alita swap her brain in the F-Box for Lou's, which Alita agreed to at first. When she had a change of heart after Colonel Payne questioned her actions and then tried to recover her brain, Super Nova attacked her with Secare Deum. Although 80% was blocked by Nova X, this disintegrated her Imaginos Body. He then proposed to his fellow incarnations that they jointly pursue their karmic studies, but was rebuffed by Porta Nova. Super Nova responded by attacking him and frying Porta Nova's brain bio-chip, but Nova X managed to escape.

During the Space Karate Forces' Block-B Quarterfinals match against Anomaly, Super Nova crashed Combat TV's broadcast, presenting himself as Dr. Super Nova as a result of an honorary doctorate he received from Orbital University on Ketheres.[5] He revealed to Jack Gerambo, Hegeor Hopper and those watching that he was responsible for bringing the Space Angels into outer space and that Alita was dead by his hand. During the match, Super Nova became intrigued by Anomaly and decided to remain in the commentary booth to provide his own analysis of the being; he dismissed Toji's claims of Alita's survival, saying he was there and saw her body disintegrate.

After Alita's resurrection and defeat of Tunguska in the semifinals, Super Nova accompanied Mbadi when he confronted her. Dubbing her new body Imaginos 2.0, he was eager to discover the reasons behind her revival and was prepared to prevent Mbadi from damaging her brain bio-chip. Alita's enhanced hacking capabilities however defeated Mbadi's and Super Nova's cyberlocks, although the latter was able to run a Core Field Deep scan on her to discover why. Following the resumption of the ZOTT, Super Nova recovered Tzykrow after he was nearly killed by Mbadi before departing Ketheres for Olympus Spaceport on Mars.